Apple will present iOS 14 beta for the first time at WWDC (22th June) . As always, the starting shot is given shortly after the iPhone 12 presentation in autumn. But on which devices can iOS 14 be installed? The French website iPhonesoft has now published a list of iOS 14 Beta compatible devices. This information should come from a “friend of Apple developers”.

If the information is correct, iOS 14 beta can be installed on all iPhone models that are also compatible with iOS 13. And therefore even the more than four-year-old iPhone SE is supported. The latest models, which will be presented in September, will of course also receive the update.

But the new rumor does not seem to be quite as certain. iPhonesoft invalidates the statement itself and says that Apple could of course back down and delete the oldest devices. Then not only the iPhone SE, but also the iPhone 6s would fall out – the A9 processor is used here.

While the list for iOS 14 is the same as for iOS 13, Apple is supposed to use the red pencil for iPadOS 14. According to the latest rumors, the iPad mini 4 (presented in September 2015) and the iPad Air 2 (presented in October 2014) have to do without the update. The following iPad models should get the update:

The latest rumors should be treated with caution. iPhonesoft has also missed the point and claimed back then that iOS 13 should no longer be offered for the iPhone SE – but as you have read, the iPhone SE supports iOS 13. It has to be borne in mind that the prediction that iOS 12 will continue to be available iPhone 5s and iPhone 6 will run correctly.

Official statements will only be made at the WWDC. Until then, we have to wait a little longer. It would of course be very nice if as many devices as possible get the update to version 14. 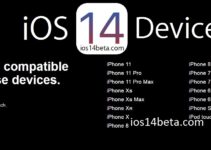