iOS 14 Supported Devices. In the article, we will analyze the main features of iOS 14, which devices will support the update, and also name the supported iPadOS devices.

There is almost no doubt that Apple will traditionally present the new iOS 14 and iPadOS 14 at a presentation that will open the next WWDC 2020 (22th June) developer conference – it will, as usual, be held in June this year. According to sources in the French site iPhonesoft, the new version of the iOS operating system will be supported by absolutely all the same devices as iOS 13 last year. But this does not concern the new iPadOS – it will receive an abbreviated list of supported tablets.

According to rumors, iOS 14 will be able to install even on the iPhone SE and iPhone 6s. All other devices introduced since then will also be supported.

Which iPhones will get iOS 14

iOS 14 will be supported by many iPhones. It will support all iPhone models released from 2015 (iPhone 6s, iPhone 6s Plus) . Thus, the list will look as follows

Of course, iOS 14 will also support all iPhone 2020, including the affordable iPhone SE 2020, as well as the iPhone 12 line. It is possible that Apple will eventually abandon support for iPhone SE and iPhone 6s – it depends only on the following several months of development and success in testing new features on older devices. But today she has no such plans.

Among the devices supporting iOS 14, there are Apple tablet devices:

iPads are now separately in iPadOS

As for the iPad line, according to this information, Apple has already planned to abandon support for the iPad mini 4, introduced in September 2015, as well as the iPad Air 2, which was shown in October 2014. These devices run on A8 and A8X chips.

The full version of iPadOS has been available for download. Here is the official list of iPads with support for the new OS:

How to watch the presentation of iOS 14

In June this year, we will host the WWDC 2020 in a unique format that will open up completely new ways for communication and interaction to developers from around the world, ”said Phil Schiller, Apple’s Senior Vice President of Worldwide Marketing. – The current situation in the world required us to find a new format for WWDC 2020, and today we are pleased to announce that all our developers will have full access to presentations, meetings and training opportunities at our conference. We will give all the details in the coming weeks. 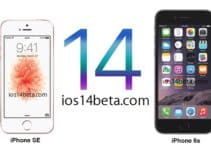