Apple iOS 14 beta will be the next major software update for the iPhone. What can we expect from new features in iOS 14 beta and when can you install this update for the first time? In this overview we talk about everything that awaits you!

Apple continues to expand iOS, and in iOS 14 we can expect a huge pile of improvements and new functions. In this overview we talk about the next major update for the iPhone. This iOS version will be pre-installed on the 2020 iPhones. There are already a number of functions that we can deduce from the developments, such as support for 5G.

In the summer of 2020 there will be multiple beta versions of iOS 14 for developers and public beta testers. The final version of iOS 14 is traditionally expected in September 2020. This is the usual timetable that Apple follows for new iOS releases.

These are important data on the way to the final release of iOS 14:

With iOS 13 a few devices were dropped: the iPhone 5s, iPhone 6 and iPhone 6 Plus did not receive an update anymore. This may happen again with iOS 14. If Apple wants to drop devices, then this will probably be the iPhone 6s, iPhone 6s Plus and iPhone SE. All three are equipped with the same chip and internal technology. If the iPhone 6s falls off, the same applies to the iPhone SE.

These are the iPhones that get an update to iOS 14 (not yet official):

A different list applies to the iPad, because iPadOS 14 appears for this.

There are a number of developments that we are already seeing:

There have been no rumors about new features in iOS 14. Yet there is one improvement that we can expect: Apple will take the first steps to make iOS suitable for 5G network technology. This is a feature that will only work on the latest devices, since it depends on hardware. 5G networks require a specific modem chip and that means you’ll have to upgrade if the 2020 iPhones do indeed get support for 5G. It may seem a little early now to add it, but other manufacturers are already working on it. And given that iPhones often last five years or more, it’s a feature that Apple must already take into account.

iOS 14 may already include support for Apple’s AR glasses. Apple would have plans to release it in the course of 2020, although of course there can always be an “AirPower situation.” In other words: the accessory is announced, but is subsequently postponed regularly and subsequently canceled.

Such glasses will probably be highly dependent on the iPhone, so Apple must already take this into account in iOS. The glasses can, for example, provide text messages and navigation instructions. The iPhone takes care of all computer operations. This could change at a later time. Just like with the Apple Watch, the glasses could then be given an independent App Store, with apps that you can download directly onto the glasses.

Apple will probably handle it carefully. Google Glasses and Snapchat Spectacles have not been a major sales success. Amazon is now trying it out with the Amazon Echo Frames, but does this as an experimental product in order not to raise high expectations. At Apple, we’ve never seen such an experimental product before, so it’s possible that Apple will eventually postpone it because they think the market is not ready.

In the meantime, the first iOS 14 concept has been released, made by “Hacker 34”. Here we see a number of functions that we may see in iOS 14, including a smaller call screen, multiple users, a standard GIF keyboard and an always-on screen. 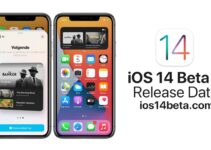