iOS 14 Beta Home Screen Widgets. What look is waiting for iPhone users who will get home screen widgets with iOS 14 beta? The last leak that took place with the iOS 14 concept revealed the new design.

Along with iOS 14 beta, widgets can also be used on the home screen.

Although iPhone users were introduced to widgets with the iOS 10 operating system for the first time, their use is limited to a single screen. So much so that widgets are located in the sidebar, which we see only when we slide the home screen or lock screen to the left.

However, this situation will change with iOS 14 beta widgets will become more functional and start to show up on the home screen.

There is a lot of wonder as to how these widgets will look and have a working logic. When we examine the leaked image above; we see that some application icons will grow a little bit and there will be informative dynamic widget such as weather that can perform various functions right next to them. It is stated that these widget will not be fixed and can be moved to various points as in the Android operating system.

Widgets that can exhaust system resources and slow down Android phones with low hardware features; It is also a matter of curiosity how the expansion of the usage area with iOS 14 will have an impact on the performance of iPhones. 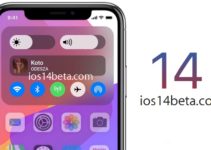